In the face of Detroit’s tumultuous bankruptcy proceedings, in which multiple parties are quarreling to protect their interests, the city and its unions have quietly negotiated a scaled-back pension plan that could serve as a model for other troubled governments.

One of the most closely watched issues of the case is whether a government pension plan can be legally cut in bankruptcy. Detroit, saddled with a pension system it cannot afford, has introduced a new plan with the cooperation of its unions, which have been among the most vocal opponents of cutbacks.

While both retired and active workers now participate in the same city pension system, the new plan is intended only for Detroit’s active workers, who will shift to it on July 1. Retirees will keep 73 percent to 100 percent of their current base pensions under the city’s proposal to exit bankruptcy.

The new plan is called a hybrid, which means the workers will keep some of their current plan’s most valuable features but will give up others. Trading down to a less generous pension plan is often said to be a legal nonstarter for government workers, so if Detroit succeeds, its hybrid could become a model for other distressed governments from Maine to California. Countless elected officials — from Rahm Emanuel, the Democratic mayor of Chicago, to Chris Christie, the Republican governor of New Jersey — are caught between ballooning pension obligations, angry local taxpayers who don’t want to pay for them and labor lawyers who say it’s impossible to cut back.

“We have a festering sore here,” Christopher M. Klein, the judge in the bankruptcy case of Stockton, Calif., said at a hearing in May, referring to that city’s surging pension costs. “We’ve got to get in there and excise it.” 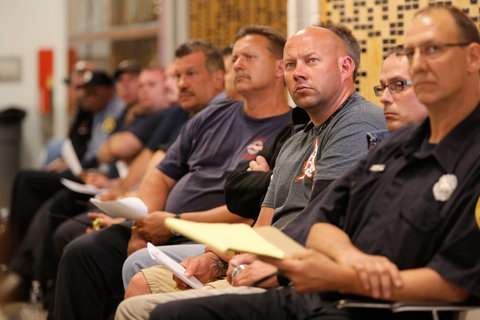 Tim Galloway for The New York Times
Detroit firefighters and police at a meeting about their pensions.

Detroit’s current pension system simply costs too much relative to its battered tax base, and the watchword for Detroit this summer is feasibility. For the city to emerge from bankruptcy, its emergency manager, Kevyn D. Orr, must convince Steven W. Rhodes, the judge overseeing Detroit’s bankruptcy case, that his long-term financial plan is feasible. The matter is to be decided at a trial to start in August.

There would be little hope of persuading Judge Rhodes if Detroit’s workers were still covered by the existing pension plan and struggling local taxpayers were still liable for the relentlessly mounting obligations. For many years, the current plan allowed city workers to earn benefits that others in Detroit could only dream about — full pensions at 55, longevity bonuses, annual cost-of-living increases, an extra “13th check” in December and bankable sick leave that could be converted to cash, among others. In recent years, the resulting pensions have been greater than the per capita income of the residents who were expected to pay for them.

On June 30, Mr. Orr will freeze that pension plan, meaning that the city’s current workers will not accrue any further benefits on those terms.

Starting the next day, in the new hybrid plan, they will still earn so-called defined-benefit pensions — a specified monthly payment based on tenure, age and earnings history — something their unions consider critical. But they will also start to bear most of the new plan’s investment risk. That means Detroit’s taxpayers — who pay a city income tax in addition to property and sales taxes — will no longer face cash calls every time the plan’s investments drop in value. Officials hope that making the workers backstop the investments will discourage overreliance on high-risk strategies.

This unusual combination of features gives both the city and the unions an opportunity to declare victory and provides Mr. Orr with ammunition for the coming feasibility trial.

But it also flies in the face of a legal principle known as the vested-rights doctrine, which holds that the pension formula in force on the day a public worker goes on the job cannot be reduced for the full duration of employment. No such legal protection exists for workers in the private sector, whose pension plans can be frozen at any time. But in the public sector, the vested-rights doctrine is an article of faith, zealously defended, and it helps explain why a bankrupt city like Stockton is proposing to saddle its other creditors with big losses but not touch the pension plan.

The vested-rights doctrine is especially powerful in California, growing out of court decisions dating back to 1947. Unions in San Jose recently used it to keep the city from making its workers contribute more toward their pensions. Employees of four California counties argued in court last year that they had a vested right to pad their pensions by counting things like unused vacation time in their benefit calculations, despite laws prohibiting the practice. In March, Judge David B. Flinn of Contra Costa County Superior Court ruled that there was no such thing as a vested right to an illegal benefit — but the ruling applies only to current workers. Retirees are still receiving the padded pensions.

California’s state pension system, Calpers, is a powerful proponent of the vested-rights doctrine, and many state and local governments follow its lead.

In Detroit’s bankruptcy, however, the vested-rights doctrine does not appear to be an issue. The Michigan law for distressed cities gives emergency managers like Mr. Orr the power to set the terms of public employment. That means he can legally freeze Detroit’s existing pension plans and establish new ones for city workers, said Bill Nowling, a spokesman for Mr. Orr.

“He is not making any benefit cuts,” Mr. Nowling added.

For Detroit’s retirees, it’s a different matter. They are not being asked to give up benefits they had hoped to earn in the future; they are being told they must give up benefits they have already earned. Michigan’s constitution forbids this, so Mr. Orr is using the Chapter 9 municipal bankruptcy process, in which federal law applies. A bitter battle is already taking shape.

By the time the fate of the retirees has been decided, Detroit’s workers will already be earning hybrid benefits. To shift the investment risk their way, Detroit has set up a series of eight “levers” to pull if the plan’s investments falter. They include setting up a reserve fund that must be used to cover losses, raising the workers’ required contributions, lowering retirees’ cost-of-living increases and making workers build up their benefits more slowly.

Should investments not produce the expected returns — in a protracted bear market, for example — leaving too little money to meet all obligations, officials will be required to pull as many levers as it takes to get the plan back to the 100 percent funded level within five years. Only if all eight levers are pulled and the plan is still not responding adequately can Detroit’s taxpayers be called on to rescue it.

To measure the level of funding, the plan will assume a 6.75 percent rate of return. That still allows for a substantial amount of risk, although it is less than the 7.9 percent assumption the city was using when it declared bankruptcy. Officials of the American Federation of State, County and Municipal Employees, which led the negotiations, did not respond to calls seeking comment. The union is one of 48 that represent Detroit’s municipal workers.

Even as they were negotiating the hybrid pension plan, Detroit’s unions were still appealing a ruling last December by Judge Rhodes that pensions could be cut under federal bankruptcy law, despite protective language in Michigan’s constitution. The unions are required to drop the appeal if they vote for Detroit’s plan of adjustment. From California, Calpers has asked to serve as a “friend of the court” in the appeal, saying Judge Rhodes’s decision “raises issues that are of critical importance to Calpers and its 1.7 million members.”

Calpers’s brief argues that Judge Rhodes ruled improperly and asks the United States Court of Appeals for the Sixth Circuit to vacate his finding that state laws protecting pensions are not binding in bankruptcy cases. Although California’s laws have no force in a federal case in Michigan, Calpers expressed concern that rulings concerning Detroit’s bankruptcy might recast the legal landscape in California.

“Such a precedent can be, and has been, misconstrued for the broad proposition that all pensions are subject to impairment in Chapter 9,” the Calpers brief said.