Longevity has a downside for those paying the bills, and the higher costs now have to be reflected on corporate balance sheets because of new mortality estimates released in October.

The new estimates won’t affect many U.S. companies, which long ago shifted their employees to defined-contribution plans like 401(k)s, which leave workers on their own after retirement. But they are hitting other big companies with defined-benefit plans that have to make payments to some former employees for as long as they live. The changes may also prompt more companies to take steps to reduce the risks associated with their pension plans, experts say.

When GM announced fourth-quarter earnings Feb. 4, it said the mortality changes had caused the funding of its U.S. pension plans to fall short by an additional $2.2 billion and contributed to significant pension losses that will be filtered into its earnings over a period of years. 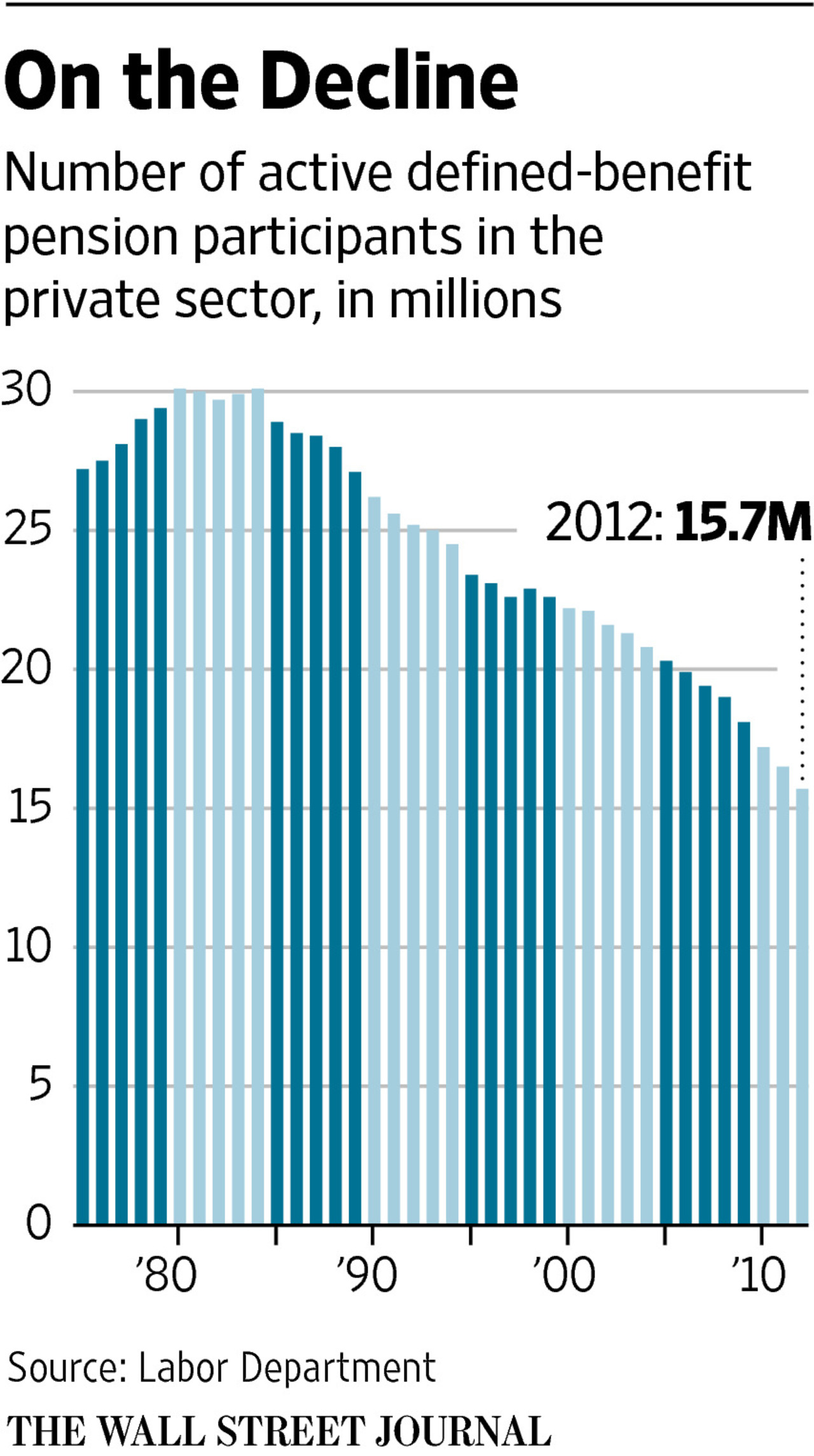 Verizon Communications Inc. and AT&T Inc. recorded big charges to earnings tied to their pension and retiree-benefit plans partly as a result of the new estimates, and the changes could have a significant impact across corporate America. Consulting firm Towers Watson estimates the funding status of 400 large U.S. companies could weaken by a total of $72 billion as a result.

The cost is another weight on pension-plan operators already wrestling with the impact of declining interest rates. Lower rates boost the current value of the future payments the plans have promised to retirees because the value of future pension obligations isn’t discounted back to the present as dramatically. That raises the current value of pension obligations, making pension plans more underfunded.

Some companies will see a quicker, more concentrated impact than others. Ultimately, the mortality changes are expected to affect most or all companies with old-style defined-benefit pension plans that commit to specified payout levels through their retirees’ lifetimes.

Larger companies tend to still have a higher proportion of employees in defined-benefit plans. According to 2014 data from the Bureau of Labor Statistics, 41% of workers at companies with 500 employees or more participate in such plans, compared with just 16% in the U.S. private sector as a whole. Overall, there were 15.7 million active participants in private-sector defined-benefit pension plans in 2012, according to the Labor Depatment. That represents a 48% decline from 1980, which was the peak of participation in such plans.

“Most of the major plans are certainly going to be affected in a meaningful way” by the mortality changes, said Bruce Cadenhead, chief actuary for the U.S. retirement business at Mercer, another consulting firm.

The math is pretty straightforward: Longer lives lead to more pension payments by companies, and thus higher costs. But the timing of the financial hit varies.

The new mortality assumptions are having the biggest, most immediate effect on companies like AT&T and Verizon, which have revamped their pension accounting over the past few years to show gains and losses in the year they occur. Most companies still smooth out the changes over a period of years, meaning smaller hits to their profits in any given earnings report.

Last month, AT&T took a fourth-quarter pretax charge of $7.9 billion on its pension and retiree benefit plans. It said the charge stemmed largely from declining interest rates, but it also cited the new mortality assumptions. In its annual report, filed Friday, AT&T also said its own update of mortality assumptions boosted its pension and retiree-benefit obligations by $1.5 billion in 2014.

Though Kraft noted its operating profit and per-share earnings both grew in 2014 if changes in retiree-benefit plans were excluded. Part of Kellogg Co. ’s pretax $822 million fourth-quarter pension charge came from the mortality changes, though the company said declining interest rates were a bigger factor. The changes could lead companies to increase voluntary contributions to their pension plans. They could also encourage companies to take such steps as offering lump-sum buyouts to retirees or transferring pension obligations to insurers to reduce their pension risks.

Kimberly-Clark Corp. , for instance, said Monday that it had purchased annuity contracts from two insurers that will offload responsibility for pension benefits for 21,000 of the company’s retirees. The move will reduce Kimberly-Clark’s pension obligations by about $2.5 billion and will lead it to take a pretax second-quarter charge of $1.3 billion.

The mortality changes weren’t the only factor in the company’s move, but they “highlighted the volatility of sponsoring a large pension plan and played a part in our decision,” a Kimberly-Clark spokesman said.

Some companies may see the impact of the mortality changes play out over a longer period if they still smooth pension gains and losses into their results gradually.

GM said it expects a $295 million reduction in its 2015 earnings as it begins to filter in pension losses stemming from the mortality changes and the interest-rate declines, primarily involving its non-U.S. plans. The company also said earlier this month that $2.2 billion of the additional $3.6 billion of underfunding its U.S. pension plans experienced in 2014 was due to the mortality changes.

Similarly, General Electric Co. estimated that the new mortality assumptions could cause its retiree obligations to rise by $5 billion and hurt its profit this year.

GE will likely provide an update in its annual report, a spokesman said. A Securities and Exchange Commission official recently suggested that companies should tell investors sooner rather than later about the mortality assumptions’ impact.

Companies “should disclose the impact of mortality to the extent it results in a significant change” in pension obligations, said T. Kirk Crews, an SEC professional accounting fellow, at a December conference.