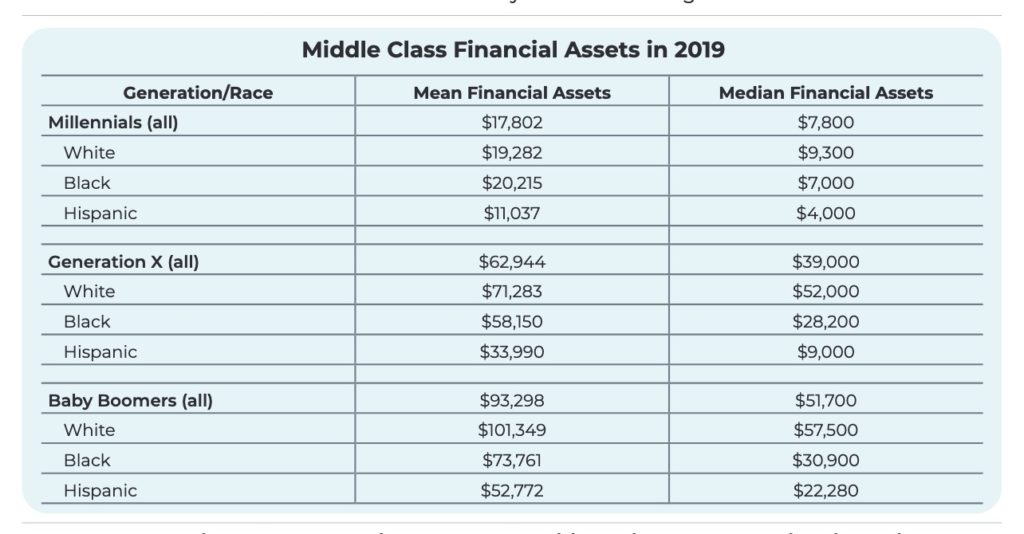 “Baby Boomer households are retired or near retirement, but their assets fall far short of what’s required to finance a secure retirement,” Bond explained. “A nest egg of $51,700, the median amount middle class Boomers hold, would generate only $2000 of income annually over 30 years. This means that many middle class Boomer households may struggle in retirement and could face a sharp reduction in their standard of living.”

The research indicates that implementing pragmatic policy solutions can help middle class households get on a better path to saving for retirement including strengthening and expanding Social Security; protecting defined benefit pensions; and ensuring access to a retirement savings plan through an employer.

For this research, the middle class is defined as those between the 30th and 70th percentiles of net worth, or the middle 40 percent. As in the Stark Inequality report, three generational cohorts are considered in this middle class analysis: Millennials, Generation X, and Baby Boomers.

The research is based upon data from the Federal Reserve’s Survey of Consumer Finances (SCF). It examines financial asset ownership, a broader category than retirement assets. According to the SCF, the category of financial assets consists of liquid assets, certificates of deposit, directly held pooled investment funds, stocks, bonds, quasi-liquid assets, savings bonds, whole life insurance, other managed assets, and other financial assets. It does not include physical assets such as a home or a car. The data for this research is for households rather than individuals.