The country faces a growing retirement crisis. An ever larger share of the fastest growing part of the population will struggle to make ends meet in retirement. Estimates show that many have not saved enough to offset declining Social Security benefits and rising costs due to greater longevity and health care inflation, just for starters.

As a result, we should see retirees increasingly face financial struggles. This hasn’t happened yet because a number of favorable trends in recent years have helped older households to offset insufficient savings. Many older workers have been able to find paid work and stayed on the job for longer than would have been possible just a few years ago. More jobs mean later retirement and higher incomes. And the stock market gains of the past several years have boosted balances in 401(k)s and IRAs.

The reality of the retirement crisis has not gone away because recent favorable trends have temporarily helped out older workers . More jobs and higher retirement balances are certainly welcome, but retirees can unexpectedly face a sharp downturn in their economic security in the next recession. In fact, it is likely that the outlook for retirement security will become worse much faster in the next recession than in previous ones. 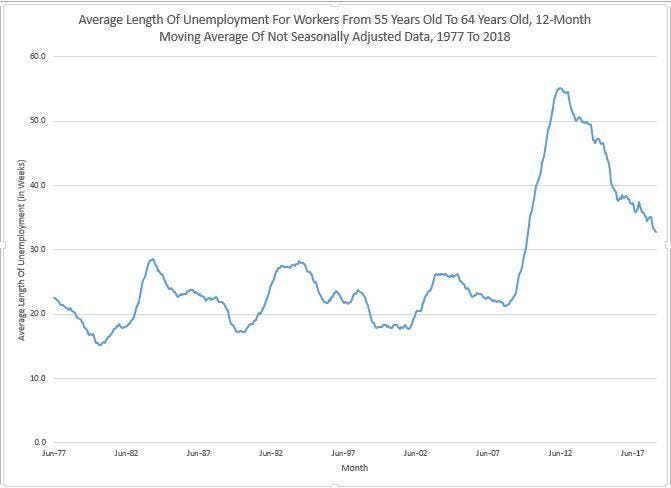 In the next recession, labor market opportunities will again quickly disappear for older workers, forcing them to rely more and earlier on their savings, which are small to begin with.

The need to keep on working for older workers reflects the lack of savings overall. About 40% of near-retirees – those aged from 55 years to 64 years, who weren’t yet retired – had no retirement savings at all in 2016. And the median amount in those retirement accounts for those who had any was $100,000 in 2016. Spread out over 15 or 20 years this amounts to a few hundred dollars a month – too little to serve as a serious cushion in a recession.

More broadly, retirees in 2016 had less wealth than in previous decades. That year, retirees at the median had wealth equal to 552.8% of their income, slightly up from the 480.6% recorded in 2013, but still well below the levels of almost 800% just before the last two recessions. Wealth relative to income has been comparatively low in recent years because of the cumulative effects of stock and housing market crashes. And many retirees need to rely more on their savings for income than in the past since fewer have defined benefit pensions.

Retirees now have less of a buffer against an economic downturn, but they face higher costs than in the past. For instance, three-in-five retirees, 60.3% to be exact, owed any debt in 2016, which is the highest share since the data started in 1989. They will still need to repay that debt, no matter what happens to their incomes in a recession. 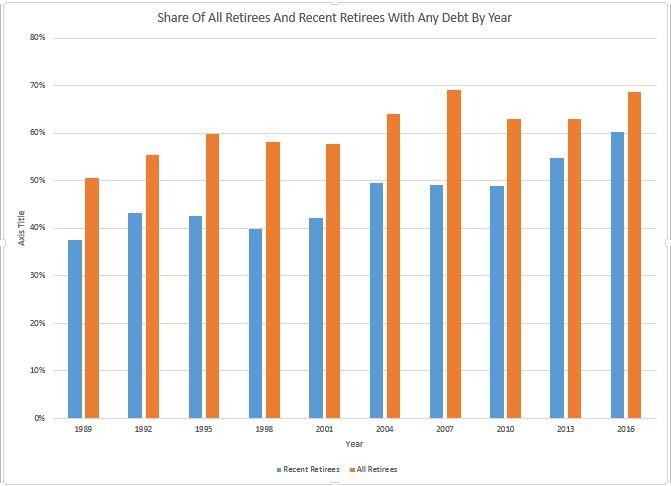 Being squeezed between falling incomes and high costs, retirees will have few options left to them. They could cut back on spending, but typical retiree incomes leave very little room for that. Retiree finances will burst just like a balloon that gets squeezed too hard. The result will be more bankruptcies and foreclosures among retirees, bringing the retirement crisis in sharp relief.

Policymakers cannot take solace in the current situation. The warning signs for a quick erosion of retirement incomes are clearly visible in the data. Policymakers can take several steps to ensure that the next recession will not quickly lead to a sharp downward spiral for older workers and retirees. This could mean improved Social Security benefits, but also more lower-cost and lower-risk options to save for retirement, while people still have incomes and jobs.