Defined-benefit pensions are an economically significant source of retirement income in the United States. About 37 million private sector workers rely on one of the 25,000 defined-benefit plans sponsored by the Pension Benefit Guaranty Corporation (PBGC) for retirement income. These employees receive a defined sum of money, i.e., “defined benefit”, on retirement. A key feature of defined-benefit plans, which differentiates them from defined-contribution plans, is that the responsibility for funding future benefits falls primarily on the company sponsoring the plan (“sponsor”). More often than not, these plans are underfunded, i.e., plan liabilities exceed plan assets. Sponsors also remain heavily invested in equity markets to “earn their way” out of underfunding using the higher expected returns on equities. However, equity investments come at the cost of volatility in plan funding, with consequent volatility in the cash contributions that sponsors are required to make into plans. Research shows that the large and unpredictable contributions needed for defined-benefit plans act as a constraint on sponsors’ investment activities.

An increasingly vocal conversation on de-risking can be heard in the corporate defined-benefit pension arena around the world. Sponsors are employing a range of strategies to de-risk – shifting pension asset portfolios away from equity and towards fixed-income investments to better match pension assets with bond-like pension liabilities (also known as “liability-driven investing”); or selling their pension obligations to insurance companies in pension risk transfer transactions. Discussions in the media and by pensions commentators point to certain regulatory triggers for the increasing de-risking activity observed in recent times. In a recent paper, we argue that the Tax Cuts and Jobs Act of 2017 (the “TCJA”), one of the most dramatic changes to the US tax landscape in decades, has served as a driver of pension de-risking.

Tax incentives are known to be an important driver of pension policy, as contributions to defined-benefit plans can be deducted from the sponsor’s taxable income within certain limits, and all earnings within the pension fund are tax-exempt. The TCJA decreased the tax burden on US corporations by eliminating the four-step graduated tax rate structure (with a highest rate of 35%), replacing it with a flat rate of 21%; this reduction incentivises firms to accelerate any tax deductions so as to maximise deductions obtained at the higher (“old”) rate. One such deduction is the cash contribution towards defined benefit plans. Consistently, both news media and academic research (Gaertner et al., 2020) document that US sponsors make sizeable discretionary contributions to their defined benefit plans, motivated primarily by the tax law change. Figure 1 shows that there is a significant increase in voluntary contributions after the passage of TCJA, while mandatory contributions (determined by formulae set by federal pension regulation) remain fairly constant. We estimate TCJA-triggered contributions to be between $13.7 – $37.9 billion. 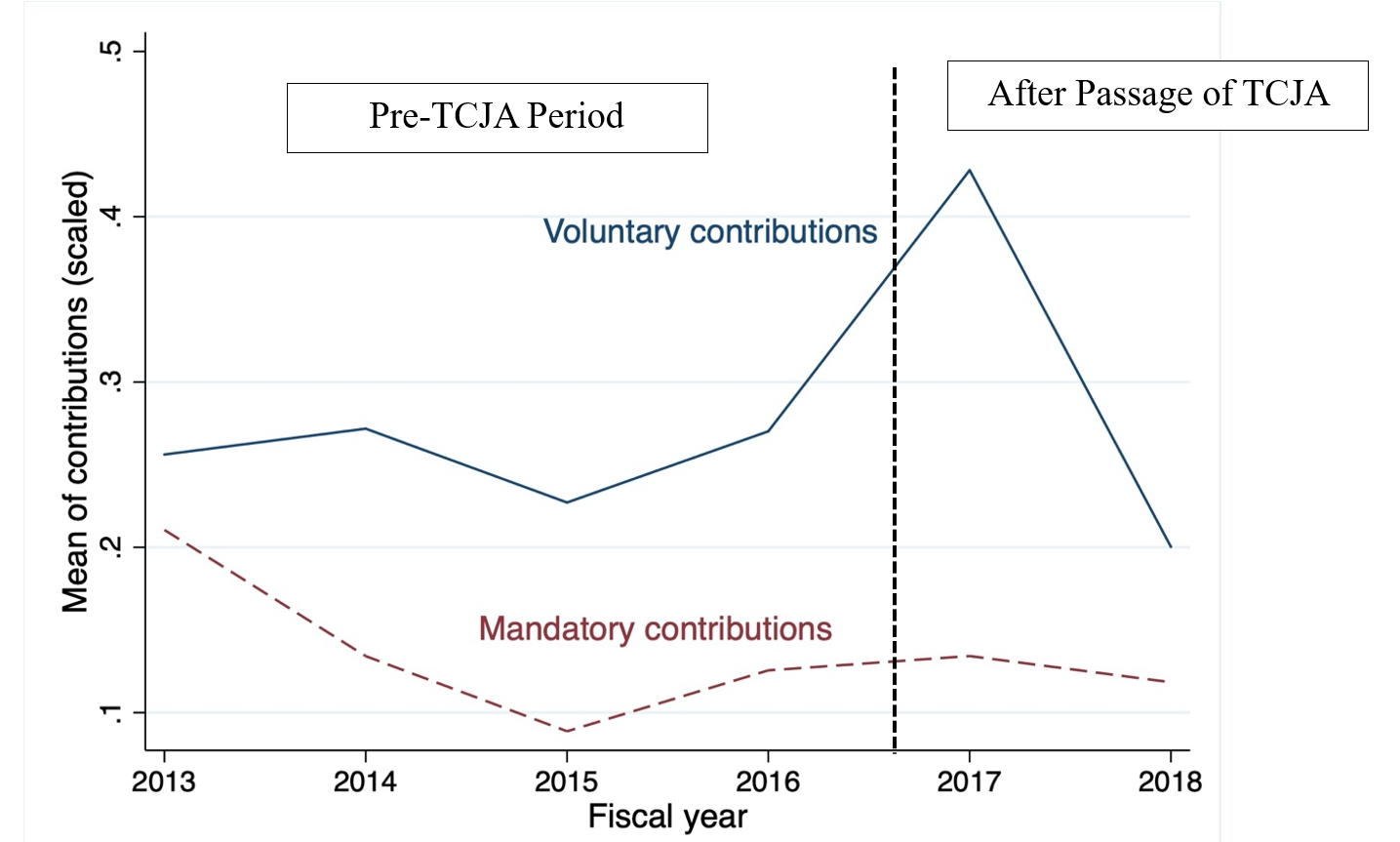 In our first set of tests, we examine whether pension de-risking concerns drove this surge in contributions. A surge in contributions, holding all else constant, improves pension funding status. Having a well-funded plan is a crucial requirement for any de-risking strategy, be it a shift in asset allocation to better match pension assets with liabilities, or a removal of the pension obligation from the balance sheet altogether. We expect the contribution response to be higher from sponsors with relatively poorly funded plans, and uncertain benefit payouts in the future. These sponsors can reap the most benefits from achieving (near-) full funding and proceeding to de-risk their obligations now. We find evidence consistent with both predictions, suggesting that the desire to reduce long-term funding risk is a key force shaping the TCJA response. Furthermore, sponsors facing higher premium costs from the Pension Benefit Guaranty Corporation, which can be eliminated by selling the obligations to insurance companies, contribute more.

In our second set of tests, we investigate whether the TCJA drove subsequent pension de-risking, through the improved funding that it facilitated. Identifying the sponsors whose pension funding has improved more post-TCJA, we find that these firms also tend to shift their pension asset portfolios away from equity and towards fixed-income securities. We depict this graphically in Figure 2. On the x-axis, we sort all sponsors into deciles by their change in funding status, with decile 10 capturing sponsors whose funding ratio has improved the most. The y-axis captures the change in proportion of pension plan assets invested in equity or fixed income securities. We can see from this figure that firms that had the highest improvement in funding ratio (decile 10), had the highest decrease in equity investments and a corresponding increase in fixed income investments. 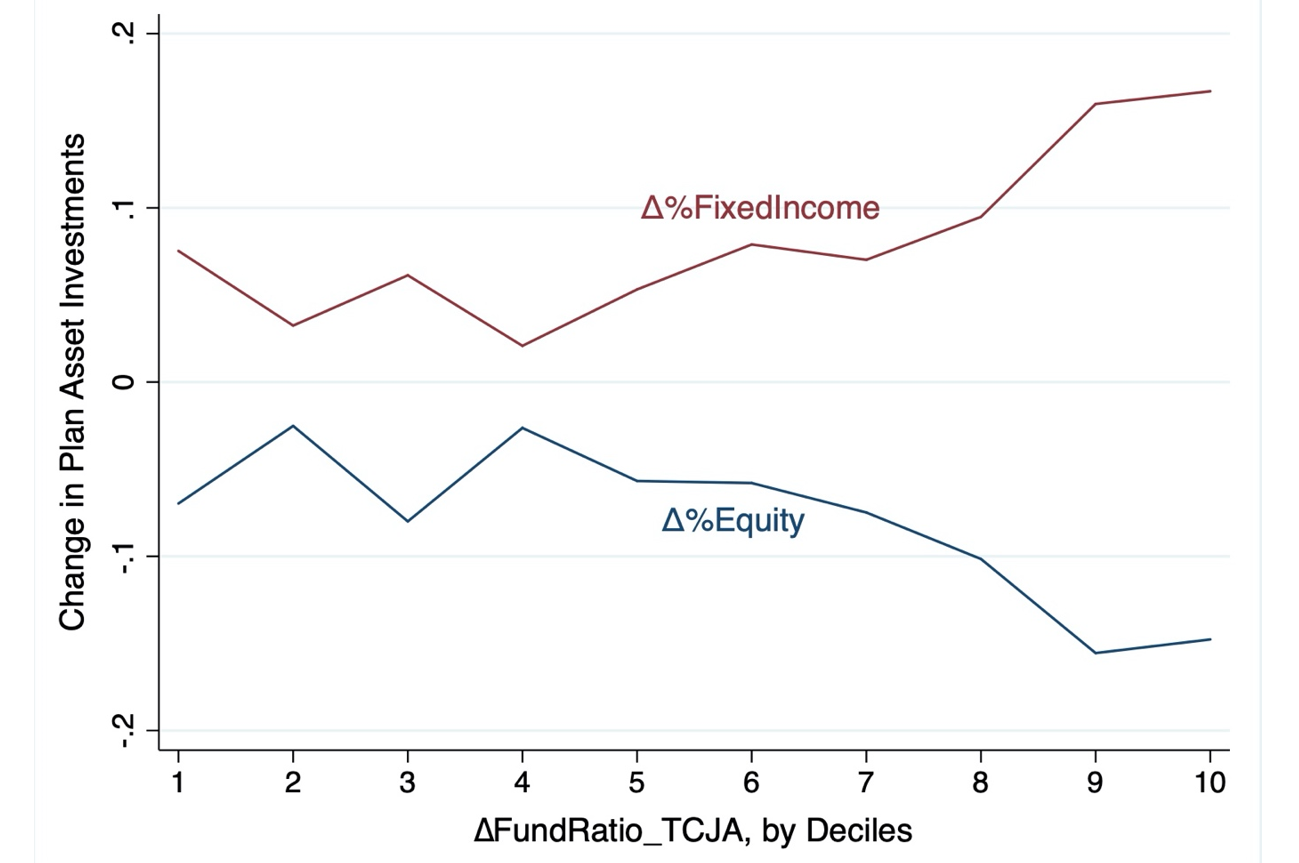 Figure 2 demonstrates the de-risking behaviour of sponsors according to their responsiveness to the TCJA. On the x-axis, we rank all the sponsors by their change in funding status and divide them into deciles. The y-axis captures the change in percentage of plan assets invested equity or fixed income securities. We can see from this figure that firms that had the highest improvement in funding ratio (decile 10), had the highest decrease in equity investments and a corresponding increase in fixed income investments in their pension asset portfolios.

We also confirm that shifts in asset allocation occur sharply around the events we study, suggesting that the TCJA acted as an inflexion point for pension asset risk policies. While the shifts we document indicate sponsors’ attempts at risk management of liabilities currently owed, we further explore whether the TCJA spurred pension risk transfer transactions, which represent even more drastic attempts to remove pension liabilities off the corporate balance sheet altogether. In exploratory analysis, we find that the more TCJA-responsive sponsors also complete more and larger pension risk transfer transactions, through settlements with insurance companies (which transfer risks to the insurer), or lump-sum payouts to plan beneficiaries (which transfer risks to plan beneficiaries). The incidence of pension risk transfer almost doubles in the most TCJA-responsive sponsors, while remaining broadly constant in less TCJA-responsive sponsors.