What Comes After 2051 Pension Relief Sunset? It Depends, Attorneys Say

Now that special financial assistance has been signed into law for union-brokered pensions, all eyes are on the year 2051—the date through which a federal stimulus package is intended to prop up the most underfunded of those plans.

Actuarial assumptions federal agencies are poised to make now about who qualifies and how much money multiemployer plans will receive could determine whether those plans survive after that date. Without financial assistance, about 124 plans were projected to become insolvent within 15 to 20 years, threatening the retirement benefits of more than 1.4 million Americans.

The Pension Benefit Guaranty Corporation, which insures private-sector plans, was beleaguered by the onslaught of drained plans and slated to go under by 2025. But, tucked into the last few pages of President Joe Biden‘s American Rescue Plan earlier this year, Congress passed the Butch Lewis Emergency Pension Plan Relief Act of 2021, a U.S. Treasury Department stimulus that promises to cover those benefits for the next 30 years.

As the dust settles in Washington over Democrats’ first major legislative victory, benefits attorneys are scratching their heads over what comes after that 30-year relief. The text of the law that protects worker benefits simply states that plans will receive “such amount required for the plan to pay all benefits” until 2051.

It doesn’t address plans’ insolvency or the underlying problems that may have caused it.

The Congressional Budget Office priced the financial relief package at roughly $86 billion when it scored the bill in March. That suggests Congress intended only to give plans enough money to pay distributions independent of their plan assets, according to Randy McGeorge, a partner at Morgan, Lewis & Bockius LLP in Pittsburgh.

“In which case, what the law does is not provide a permanent bailout but, rather, kicks the can down the road on these existing issues for about 30 years,” McGeorge said. 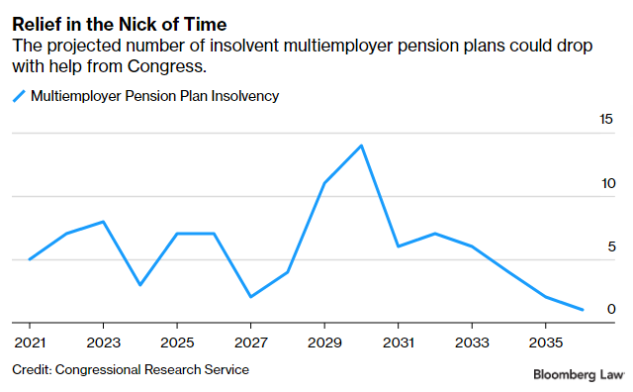 Not all multiemployer plans are at risk of failing, but more than half are at less than 50% funded, the product of poor assumptions, failed risky investments, and policies that hold healthy employers responsible for their partners’ losses.

Now, the fate of union pension plans after 2051 is in the hands of an inter-agency working group made up of officials at the PBGC and the Labor and Treasury departments.

That working group is prepping guidance that would prohibit employers exiting plans from using financial assistance for a period of at least 15 years when calculating how much money they would owe, according to officials involved in early discussions. The withdrawal liability protection is just one of a slate of rules and guidance the PBGC has until July to issue. Up for debate is contribution increases or reductions, more conditions for financial assistance, and, importantly, how much money those qualifying plans will receive.

“As it should be,” said Wendell Young IV, president and chair of the International Foundation of Employee Benefit Plans. “It’s a matter of fairness.”

Unions have put their trust in Congress before and paid deeply for it. In 2014, lawmakers passed the Multiemployer Pension Reform Act, which gave some of those plans permission to cut benefits in order to recover.

Now, just seven years later, lawmakers were compelled to pass another measure to aid underfunded plans, this one named after long-time Cincinnati Teamsters Local 100 leader Butch Lewis, one of those workers who trusted that their nest egg was untouchable until he got a letter in the mail in 2014.

“The look on his face when he got that letter one day cutting our pension 40% to 70% is a look I’ll never forget,” said his widow, Rita Lewis. “We lived our whole life around the promise that that pension was always going to be there. So, the look on his face—I don’t think it was just the loss of the money. I think he felt hurt, because he always wanted me to be financially secure.”

After Lewis died in 2015, his wife raised a groundswell of grassroots union organizers who pressured Congress to protect pensioner investments. Biden’s rescue plan is slated to pay back retirees whose benefits were cut, and some could be expecting checks in the mail in excess of $15,000.

Sen. Sherrod Brown (D-Ohio) emphasized the need to protect worker benefits over the long run during a roundtable discussion with labor leaders about the multiemployer plan aid last week.

“Workers gave up money at the bargaining table so they’d have help in the future,” Brown said. “That’s really the key to this, and that’s how we convinced people that this was fair and right. It wasn’t a bailout like Wall Street gets; it was just meeting our obligations.”

Thirty years is a long time, and it could be long enough for plans to recover in the market or with help from lawmakers, said Sarah Bryan Fask, a shareholder at Littler Mendelson PC in Philadelphia.

“If the amount of the grant covers all benefits due between now and 2051, regardless of current plan assets, it essentially ‘resets’ the system,” she said. “It also provides a window for Congress to enact more substantive reforms so that the multiemployer system does not end up in a similar predicament in 2052.”