Whole Foods is the S&P’s biggest loser in May

Whole Foods Market Inc. lost 23% of its value this month, making it the worst-performing stock in the S&P 500. The stock is near its lowest level in more than two years after the Austin-based company on May 6 reported disappointing fiscal second-quarter profit and sales and cut its full-year outlook for a third straight quarter. Same-store sales rose 4.5%, the smallest increase in at least 13 quarters and missed the consensus estimate of a 5.2% gain.

The stock: Whole Foods shares plunged 19% on May 7, their biggest daily percentage drop since 2006. As of Friday’s close, the stock has lost more than two-fifths of its value since the record close of $65 set in October.

Bull case: Those bullish on the stock liked the company’s plan to up its game after it acknowledged that it was “overly optimistic” in its ability to compete against the record-breaking results of the past few years, especially as competition has intensified. 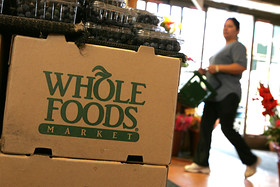 Getty Images
Whole Foods “recognizes that it needs to more effectively communicate the quality and value of its offering,” said William Blair analyst Mark Miller, who rates the stock an outperform, in a recent report, adding he was pleased to see Whole Foods issuing its own press release to highlight its competitive advantages within its supply chain after Greenpeace announced this month that Whole Foods is ranked first again among supermarket companies in the U.S. for sustainability of seafood sourcing. The analyst said Whole Foods is taking steps to cut operating expenses, such as installing a software program that should help it lower administrative expense and improve labor productivity. More than half of 29 analysts tracked by FactSet still rate the stock a buy, according to FactSet. 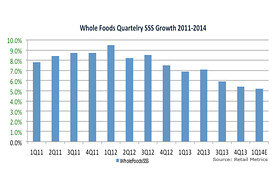 Bear case: Whole Foods stock was downgraded by at least four analysts after its disappointing results earlier this month. Stiffening competition and the company’s own poor track record of delivering on its forecasts were among key concerns. Analysts were concerned the company’s price cutting initiatives in areas like perishables will hurt its margin. They said Whole Foods will likely also have to increase its marketing expenses to make consumers aware of its price cutting initiatives. Whole Foods acknowledged earlier this month that competition has intensified from mainstream grocers like Kroger and Wegmans to niche players including Sprouts Farmers Market and privately owned Trader Joe’s. The company also is facing growing competition from Wal-Mart , the biggest U.S. food retailer, which is aggressively expanding in organic food through its recent partnership with Wild Oats.

BB&T analyst Andrew Wolf, who rates Whole Foods hold, said in a note this week that the company has cut prices on over 500 items at its greater Boston area stores since Wegmans opened a store in Chestnut Hill nearby Boston this year.

Next catalyst: The next big driver for Whole Foods’ stock likely won’t come until after the company reports its fiscal third-quarter results in July. Analysts said the company will have to show that it will be able to deliver on its forecast and at least maintain its full-year outlook. Any additional accelerated share repurchase also may help lift bottom line.

“From a longer-term standpoint, the key questions are whether Whole Foods can continue to differentiate itself as it has in the past, and will consumers respond to sharper pricing?” Miller said.